Although climate change is the center of many political debates, the warming of Earth’s climate system is a widely accepted fact in the scientific world. Ninety-seven percent of “actively publishing climate scientists” agree that Earth’s climate is changing as a result of human activities (NASA 2018). The atmosphere’s current CO2 levels (as of March 2019) are 410 parts per million (ppm), which is the highest measurement in the past 800,000 years (NASA 2018). Before the industrial revolution, Earth’s CO2 levels fluctuated between roughly 180 ppm during ice age periods and 280 ppm during interglacial periods (NASA 2018). These rising and falling levels are considered within the normal spectrum of the Earth’s temperature cycles, which have a frequency of about 100,000 years. In a glacial cycle, temperatures and CO2 levels fluctuate up and down, and about every 15,000 years the temperatures spike, and then rapidly fall soon after. In comparison, the current level of over 410 ppm represents uncharted territory. Because of the unprecedented levels of CO2, scientists do not know exactly how these high CO2 levels will affect humanity and other life that lives on this planet. However, scientists do know that throughout climate history, temperature is directly correlated with atmospheric CO2 levels (NOAA 2008). When graphed, temperature and carbon dioxide follow each other closely.

CO2 is just one of the GHGs in Earth’s atmosphere that contributes to warming Earth. GHGs have a warming effect due to their ability to trap heat in the atmosphere. GHGs in Earth’s atmosphere absorb infrared radiation emitted from Earth’s surface and also re-emit infrared radiation, commonly known as heat. The greenhouse effect refers to the natural process of infrared radiation being absorbed by GHG molecules, and then re-emitted in all directions, some of which are directed back towards Earth. “Without naturally occurring greenhouse gases, Earth's average temperature would be near 0°F (or -18°C) instead of the much warmer 59°F (15°C)” (NASA 1998).

Scientific research published in peer-reviewed journals shows that the current CO2 levels in Earth’s atmosphere have been rising since the industrial revolution (Scripps Institution of Oceanography UC San Diego 2017). Human activity is also responsible for the release of methane, nitrous oxide, and other potent GHGs (Keeling 1997). Humans are already experiencing the effects of a warmer climate through more extreme weather events, increases in pests and disease, devastation to wildlife habitat, and perhaps most directly relevant to HHS, increased costs (Keeling 1997).

Arguably, the most concerning part of global climate change is that it is extremely difficult to reverse. Now that there is momentum in warming Earth, the extent of sea ice is diminishing, sea levels are rising, oceans are warming, and glaciers around the world are melting. Further, these events lead to positive feedback loops that amplify warming. Due to climate momentum, it will take hundreds of years for GHG concentrations in the atmosphere to return to preindustrial concentrations. For these reasons, we need to take responsibility for emissions coming from the HHS community and implement this CAP immediately.

Figure 5 below shows the sources of GHGs in the United States and their percentages of total GHG emissions. The transportation, electricity, and industry sectors produce the majority of GHGs because of the burning of fossil fuels. Commercial and residential use of fossil fuels and agriculture make up the rest. Land use and deforestation increase emissions by 11 percent, meaning that the lack of CO2 uptake by trees, caused by deforestation, contributes to the overall increase in GHGs, so it can be treated as an emission source (EPA 2018a). Deforestation offset is not included in the graph. In the electricity sector, 67.9 percent of the emissions come from coal, 31.2 percent come from natural gas, and less than 1 percent of emissions come from petroleum (EPA 2019). 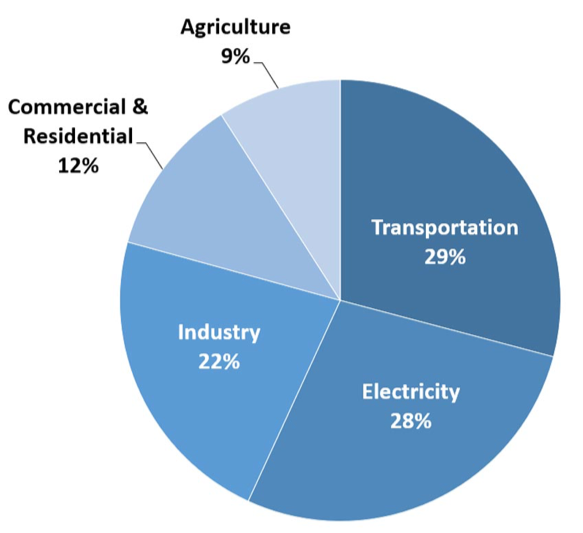 There are almost 200 worldwide scientific organizations that believe climate change is caused by human action (OPR 2019). This is creating an imbalance in Earth’s energy budget. Before the Industrial Revolution, Earth was in radiative balance, with 240 watts per meter-squared (W/m2) hitting the surface of Earth, and 240 W/m2 escaping from Earth’s atmosphere. However, it has been estimated that currently there is approximately 0.8 W/m2 less energy escaping back into space as a result of human activity (NASA 2009). Despite this being a seemingly small difference, the 0.8 W/m2 change is increasing the temperature of Earth’s atmosphere.

As Earth’s atmosphere warms, glacial ice melts, exposing the dark surface of Earth which reduces the albedo, or reflectivity of Earth’s surface. With less reflective material covering Earth, less light gets reflected back into space, and more gets absorbed by Earth’s surface, contributing further to warming. This amplification of warming is known as a positive feedback loop. Rising temperatures are also causing the melting of permafrost, the frozen soil sublayer in the poles. As permafrost melts, bacteria decompose organic matter anaerobically. This produces methane, an even more potent GHG than CO2. The release of methane increases the concentration of GHGs in the atmosphere and therefore contributes to Earth’s warming temperatures which melts more permafrost, another example of positive feedback. “Global sea level has risen by about 8 inches since reliable record keeping began in 1880. It is projected to rise another 1 to 4 feet by 2100. This is the result of added water from melting land ice and the expansion of seawater as it warms” (NASA 2019b). Warmer water takes up more space than cooler water, causing sea levels to rise. Rising sea levels lead to destruction of land through erosion and flooding. Furthermore, as ocean levels increase, humans are forced to evacuate their communities. These displaced people have come to be known as climate refugees. In addition, as sea levels rise, ocean water is pushed inland against the fresh water of rivers. This phenomenon, known as salt water intrusion, contaminates drinking water sources of coastal areas, and changes the salinity of estuaries which impacts the structure and function of estuarine ecosystems.

Climate disasters are increasing in number and gravity and are impacting economies around the world. “In 2019 (as of April 9), there have been two weather and climate disaster events with losses exceeding $1 billion each across the United States” (NOAA 2019). The rise in temperature has caused plants to migrate from their original habitats to places that are within their preferred temperature range. Climate change is having profound impacts on Earth’s ecosystems, leaving them less resilient and less able to provide the ecosystem services upon which humanity depends. As the effects of climate change continue, the scarcity of resources will increase conflicts among countries and people around the world.

Regionally, the northeastern U.S. will experience more heat waves, heavy downpours and sea level rise. “Infrastructure, agriculture, fisheries and ecosystems will be increasingly compromised” (NASA 2019b). As a result, many states and cities are beginning to incorporate climate change into their planning.